on May 09, 2018
Pondicherry India-China friendship association “PICFA” was founded by Dr.Das Bikash kali and Mrs.Radha Srinivasagopalan. It was officially established on May 9th, 2018. PICFA is a non-profitable people-to-people networking association that promotes education, culture, trade, and tourism collaborations and enhances people-to-people relations between India and China. "Pondicherry India-China friendship association" was formerly known as "Pondicherry Educational collaboration organization".
How it began!
Since 2014, Dr.Das Bikash kali and Mrs. Radha Srinivasagopalan have worked to promote educational, cultural, and tourism ties between Pondicherry and Dali city. They facilitated the cooperation between Pondicherry University and Dali University in the area of sports science (Yoga and Taichi ).
July 25th, 2016,  a high-level Pondicherry Govt. official Sri K.Lakshminarayanan, Parliamentary Secretary to C.M Pondicherry visited Dali city, assisted by Dr. Das Bikash kali and Mrs. Radha Srinivasagopalan.

On 9th Nov. 2017, Sri K.Lakshminarayanan assisted by Dr. Das, and Mrs. Radha met with the Chinese Ambassador Luo Zhaohui. Ambassador Luo mentioned his connections with Pondicherry since he was once the student of a great Chinese Sanskrit scholar XuFancheng who lived at Pondicherry for 27 years and contributed to introducing Indian culture in China. Understanding this great opportunity, Dr.Das and Mrs. Radha proposed to Ambassador Luo, to organize an international symposium of XuFancheng at Pondicherry.
Feb 27, 2018. Chief Minister of Pondicherry Sri V.Narayanasamy met Mr.Chen Jian, Party Sec. head Dali Prefecture and the delegations from Dali city at New Delhi
On March 10, 2018, the Symposium in memory of XuFancheng was organized. Scholars from both India and China participated as speakers. The event was supported by the Dept. of Culture, Chinese embassy and was organized by Pondicherry Educational collaboration organization in collaboration with INTACH Pondicherry, Aurobindo ashram, C3S, ICFA Tamilnadu chapter, and Govt. of Pondicherry Dept. of Tourism.
After the success of the event, with the moral support of Ambassador Luo Zhaohui and Cultural Counselor Zhang Jianxin, Dr.Das and Mrs. Radha officially registered the "Pondicherry India-China friendship association" on May 9th, 2018. The main objective to form the association was to promote educational and cultural ties between Pondicherry and China and develop an "India-China culture study center" in memory of XuFancheng.
On Dec. 27, 2018, State Councilor & Foreign Minister of China Mr. Wang Yi and External Affairs Minister of India Smt. Sushma Swaraj inaugurated the book, “Essays in Memory of Prof. Xu Fancheng”. The book is compiled by the Chinese Embassy based on on the event - Symposium in memory of XuFancheng held at Pondicherry, March 10, 2018)​ pic-deccanherald.com 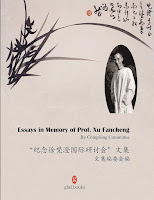 Oct. 26- 2020 - Inauguration of XuFancheng Culture study center - marking 111th birth anniversary of Prof. XuFancheng
Difference between PICFA and ICFA units/chapters - Pondicherry India China friendship association is an independent organization, registered at Pondicherry. It is not associated with any other ICFA Chapters or the All India national ICFA. PICFA is primarily focused on general people-to-people relations and has its own aims and objectives.

for any general queries feel free to, comment below

if you want to collaborate with us, mail us at picfa.in@gmail.comsubscribe to our Youtube channel -  Xu-CSC Culture lab